Sometimes you don’t know how much you love something until it is taken away. This COVID-19 crisis has shut down all major gathering sites for people. This includes sports stadiums, hockey arenas, theatres (live and movie), and spiritual gathering spaces like churches. We have discovered how much we miss gathering together and experiencing as a community. We need to have a new technology developed, which I call On-Live, to replace this experience via an on-line connection.

The importance of the physical and social environment in the consumption of live events is widely accepted. For example, according to the literature on sport marketing, the special atmosphere in sport stadiums is one of the most important reasons why people attend events. Live events create a unique entertainment value. And that’s why we go back again and again.

We live in a new reality. Gatherings of people can promote the spread of COVID-19. Authorities have disallowed people congregating in an effort to “flatten the curve.”

There have been efforts to connect online as communities. There are many offerings for online yoga classes. Choirs are singing on video-conferencing tools. Clergy are on podcasts to deliver their message. All these are mostly one way communications. They lack the element of sharing in real-time, a two way connection and participation.

We can duplicate the environment of a live event by going on-line. The tools are yet to be developed, but everything is there to put it together. I call the moving and perhaps even enhancement of a on-location live event to the on-line world as going On-Live.

Aside from the technology, we need to understand what makes up a satisfying live event atmosphere. Once we understand that, we can use User Experience Design to create the technology needed. Sebastian Uhrich, from the University of Rostock, studied this concept with sports stadiums in a paper published in 2010 (Journal of Sport Management, 2010, 24, 211-237).

The study found that attendees at a sports stadium experienced high levels of arousal and pleasure that predominantly described their experience. Those states came from four different dimensions of sport stadium atmosphere: stimuli emanating from the spectators and their behavior, stimuli relating to the architecture of the stadium, stimuli elicited by the organizers, and stimuli caused by the action of the game. 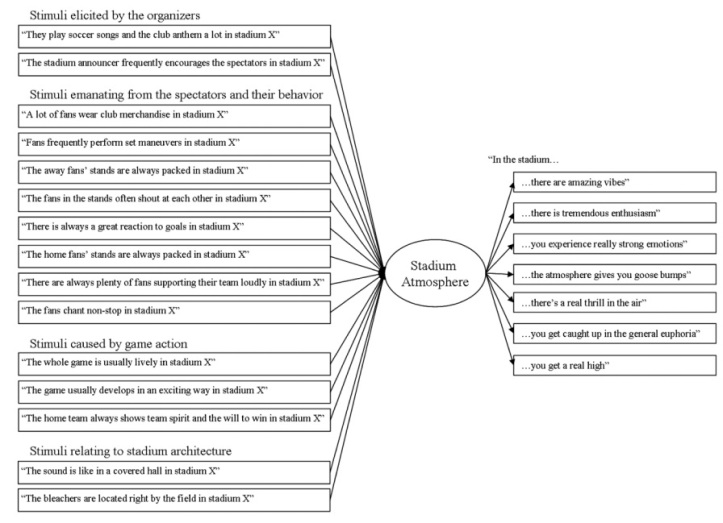 The first dimension, stimuli emanating from the spectators and their behavior, refers to various factors associated with sport fans, such as certain chants, enthusiasm when the home team scores, choreographic routines, the wearing of merchandise, and the exchange of chants between bleachers on opposite sides of the stadium. It is clear that creating a specific “fan culture” is important, as fan behavior significantly contributes to the attractiveness of sport events.

The second dimension, stimuli relating to the architecture of the stadium,
includes the direct proximity of the grandstands and bleachers to the field. This not
only ensures that spectators have a good view of the game, but also makes them feel
that they are an integral part of the action, thereby triggering affective responses
of arousal and pleasure.

The third dimension, stimuli elicited by the organizers, includes having an
enthusiastic stadium announcer and playing the club’s anthem at games. This
dimension plays a crucial role in generating the special atmosphere found in sport
stadiums.

The final dimension, stimuli caused by the action of the game, is another
important element in the stadium environment. The action of the game provides
suspense, thereby causing a response of arousal in the spectators. Further stimulation comes from players showing team spirit and a strong desire to win. Creating
a good stadium atmosphere is therefore also a function of the players, and this is
something of which the club management should make the players aware.

The study argues that social interactive factors are the key constituents of a preferential
stadium atmosphere. Consequently, the experience of a special atmosphere in a sport stadium primarily emerges from the group consumption situation, and is only partially driven by physical stimuli. The spectators are therefore both coproducers and recipients of stadium atmosphere.

The major conclusion of the study was that for events interaction with other people may be the major determinant of a consumer’s emotional experience at the point of consumption.

This exactly points out what is missing in our current on-line consumption of events. It lacks the social interaction needed to mimic a stadium atmosphere. They are isolated and mostly one-way.

Enter a new vision, On-Live Event Production. Imagine a hyped-up home theatre set-up. You have paid to view a football game from a virtual seat, a fixed vantage point. The price of the ticket is reflective the “level” of your virtual seat. You see the player running for the goal line, you get up off your seat and yell, “Go! Go! Go!” your audio is mixed with everyone else’s and gets fed back to you as a stadium roar. You join in a chant that your side is singing. You can yell at someone in another bleacher and you see and hear them yell back. The announcer yells, “Touchdown!” and the crowd goes wild, and you feel part of all of it.

This scenario would also work for theatre. You would interact with others in sharing laughs and tears with other people as you all react to the lines in “Waitress”. Spiritual gatherings can share in the prayers or chants. Everyone can see and hear everyone else in this virtual On-Live Event Production.