A Century of Relaxing Recreational Boating

Recreational boating is the use of watercraft for personal pleasure and relaxation. It is a way to relax, unwind and live in the moment. I experienced this tradition where it is thought to have started.

Clayton, NY, has a long tradition as being a great location for fishing. A unique watercraft called a skiff was fashioned to accommodate rowing around the St. Lawrence river.

During the “Gilded Age” of the early 1900’s, Clayton became “The” spot to have a summer vacation. This is because Clayton is typically 10 degrees cooler because of the prevailing winds.

At its peak, 12 trains a day ran between New York City and Clayton. Tent cities were scattered all around the village.

Boats evolved from personal skiffs and transit streamboats to wooden motor boats, ferrying people around the islands from the train station. The train station is now a park close to the 1000 Islands Harbor Hotel.

Although the crowds have gone, boating is a deep tradition in the area. Boats are widely used as transport and for fishing.

In search of that age of relaxation and enjoyment of nature, I took a cruise of the St. Lawrence that included the tradition “Shore Dinner”.

My Sweetheart and I climbed aboard the “FIN and Feather” boat captained by Jeff Garnsey. Jeff is a retired US Navy submariner and returned to his birthplace of Clayton to live his dream of being a guide. 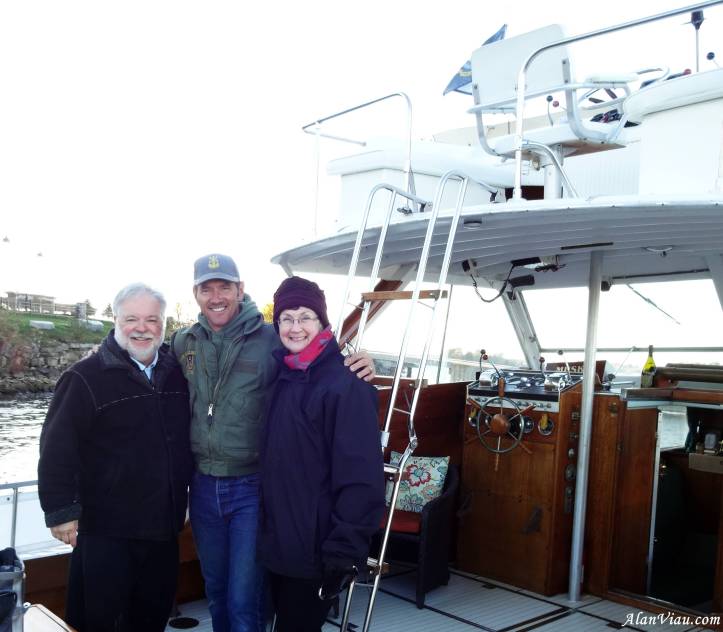 Along the trip, Jeff gave us stories of the area, the people, and the dramas. For example, the post office on Round Island is the only building that remains of the grand Frontenac Hotel that existed there… until it burnt down. This waterfront post office is the only one of its kind remaining in the USA.

When cruising on the river, you will undoubted pass by some of the many ships that slip through on the St. Lawrence Seaway. 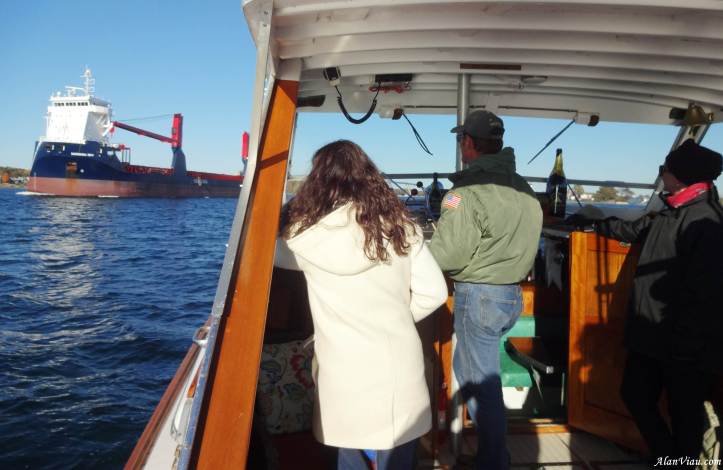 The Rock Island Lighthouse has an interesting history. From our vantage point, we were very close to where the pirate Bill Johnson sank a British ship. For his crime, he was commanded to be the lighthouse keeper for seven years. He needed to haul gallons of whale oil everyday to keep the lighthouse lit.

On our return trip we went by Pullman Island. It is the site of another castle that was leveled from a fire. The tower is the only remnant.

Jeff has traveled these waters for many years. His is a skilled sailor. He deftly navigated between shoals to head back to the dock. We were on the top deck with him. It was amazing to see the depth gauge quickly change from 30ft to 8ft of water as he maneuvered through. 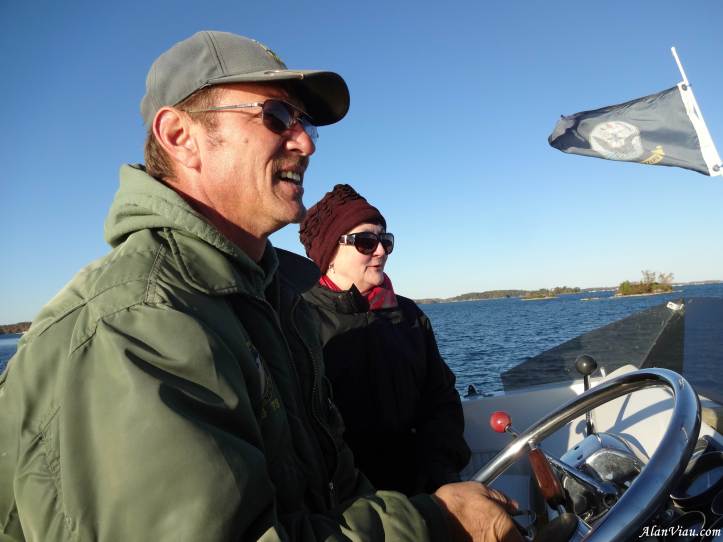 Having safely made it back top to shore, Jeff treated us to the “Shore Dinner”.

There is a century long history to “Shore Dinners”. Guides would leave in the morning going up river to fish with their guests. At lunch they would put to shore and have a “Shore Dinner” and then take an easy time in the afternoon drifting downriver back to the dock.

The Shore Dinner consists of 3 courses prepared by the guide. Since the skiffs were not large, economy of space and material was imperative. They devised a meal that could be cooked in one cast iron pan. For our Shore Dinner, Jeff used a cast steel pan that was made 100 years ago at the Fink America, Inc factory that was in Clayton.

The Fink Pan, as it is called locally, is heated over a fire. Salted pork is the first item that is cooked. The guides wanted to have something quick that the guests could eat first. Once the pork cooked, it was served with red onions and 1000 Island Dressing in a slice of thick bread. Legend has it that 1000 Island Dressing was invented by a fishing guide in Clayton.

While the guests were eating this appetizer, the guide prepared the fish and deep fried the fillets in the same pan containing the pork fat.

The main course consisted of fried fish with corn on the cob, salt potatoes and salad with 1000 Island Dressing. Our course was fried Northern Pike served with a healthy mug of local beer and it was all divine. 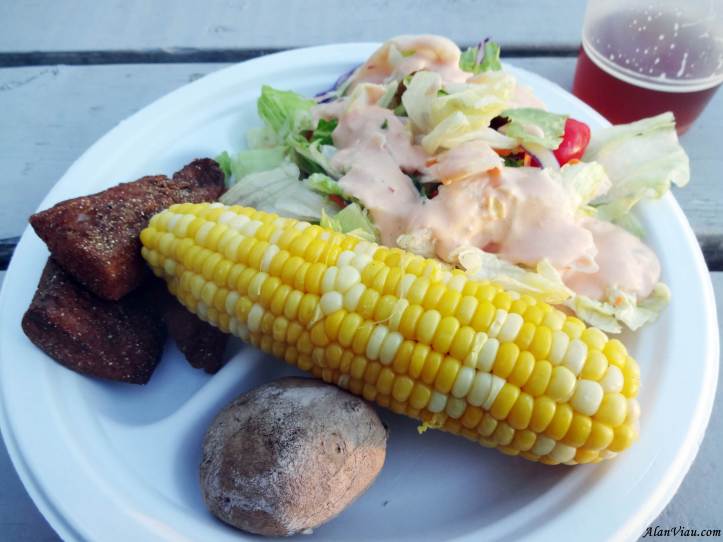 The final course was French toast that is cooked in the rendered fat. Using thick bread, it was crunchy on the outside and soft on the inside. It tasted like a fresh hot donut. Yum 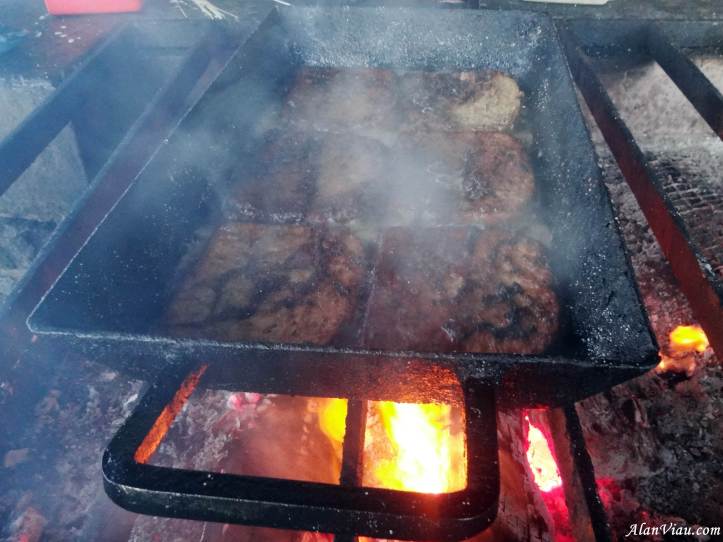 With our tummies full and the light fading, it was time to call it a day. It was quite a treat to have experienced the river and the shore dinner. I can really appreciate the allure of the  river boating life and its relaxing pace.