Music not the Only Reason to Love the Ottawa Folk Festival

Completely by happenstance, I was at the Ottawa Folk Festival for the first time. Aside from the music, there were lots of things I loved about this event and will return intentionally next year.

Then there is this little festival called the  Ottawa Folk Festival that ends the summer. I was with Sweetheart working a booth in the community tent promoting the family musical theatre company that we support, Suzart Productions.

It was a great opportunity to raise the awareness for our troop of players to a new audience. In the tent with us were several other social cause groups who wanted to raise awareness about; the lack of proper sewage treatment in Ottawa, more fair trade vendors, habitat for humanity, landmine and cluster bomb banning – wide selection of causes. It was really funny watching people as they browsed by, nodding at each group and then coming to a dead stop in front of our booth because we were different.

After doing our shift, we wandered the grounds and discovered what this festival was really about. It isn’t just about music, even though there was plenty of that.

The Ottawa Folk Festival is about celebrating the creativity of musicians, dancers, artisans and storytellers. Their mandate tells it all:

We found workshops on Bollywood dancing, guitar and ukulele masterclasses, seminars and discussions on the Emerald Ash Bore.

Other participatory and exploratory activities included the Musical Petting Zoo where people of all ages tried out a large assortment of musical instruments.

And a community mural. Anyone could paint on it. The only rule was that no letters or words could be used. I witnessed one woman painting for three hours! 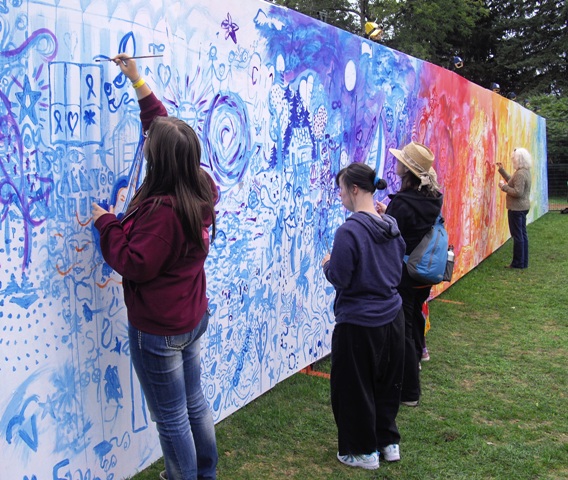 There is an emphasis on providing a ‘Green‘ festival space. We browsed through unique artisan shops and had a great selection of food to eat. I found it was a relaxed affair yet well run and organized. Next year, I am planning on coming out!